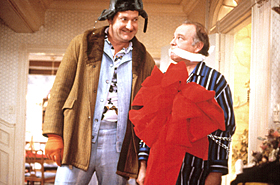 Here is a Christmas question: Was Clark Griswold constructively dismissed by his employer in National Lampoon’s Christmas Vacation? Watching the movie I was struck by two things: (1) how and why did I ever find this movie funny; and (2) this is a movie about constructive dismissal!

If you’ve never seen the movie turn on your television right now. Keep changing the channel until you find the movie, I’m sure it’s on. If that doesn’t work, bear with me while I highlight the pertinent part for this post.

The movie centres on the hero, Clark W. Griswold, portrayed by Chevy Chase. One of the movie’s themes is Clark waiting for his Christmas bonus. Clark had arranged to put in a pool for his family, but without his Christmas bonus he is unable to cover the deposit that he had to put down in December. Eventually his Christmas ‘bonus’ arrives. However, unlike years past (where Clark presumably received cash), this year Clark’s boss unilaterally (and obviously without notice) elected to enrol the staff in a Jelly of the Month Club, which, as those who have seen the movie more than once will know, is "the gift that keeps on giving the whole year."

Clark is obviously not pleased with his boss’ decision. I believe his reaction is to the effect of the following:

Hey. If any of you are looking for any last-minute gift ideas for me, I have one. I'd like Frank Shirley, my boss, right here tonight. I want him brought from his happy holiday slumber over there on Melody Lane with all the other rich people and I want him brought right here...with a big ribbon on his head! And I want to look him straight in the eye, and I want to tell him what a cheap, lying, no-good, rotten, four-fleshing, low-life, snake-licking, dirt-eating, inbred, overstuffed, ignorant, blood-sucking, dog-kissing, brainless, dickless, hopeless, heartless, fat-assed, bug-eyed, stiff-legged, spotty-lipped, worm-headed sack of monkey shit he is! Hallelujah! Holy shit! Where's the Tylenol?

It comes out, and this is the point of this story, that Clark has received his Christmas bonus in each of the past 17 years.

In my opinion the answer would be yes. If Clark’s company had always and without fail provided its employees with a Christmas bonus, such that a reasonable employee, such as our hero, would expect to receive it as part of his remuneration, then the unilateral change could reasonably be regarded as a fundamental alteration of the employee’s employment contract sufficient to ground a case for constructive dismissal.

Of course, more facts would have to be known before any opinion could be expressed to Clark, or someone like him, but on the face of it it sure looks like constructive dismissal to me.

Christmas can be a rather slow time of year for legal decisions. It is also supposed to be a season of merriment. This post was at least intended to be somewhat humorous.

That said, there is a serious side to this post. As employers face more and more pressures to increase profits and lower prices, some things will have to give – sometimes that will mean Christmas bonuses. (National Lampoon’s Christmas Vacation came out in 1989 by the way.)