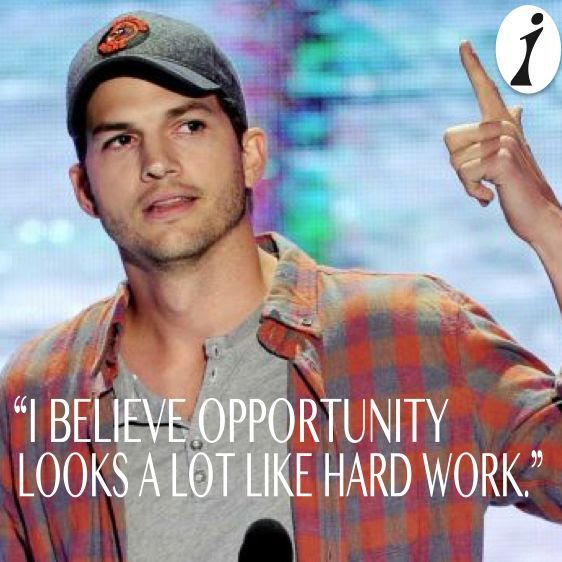 On September 18, 2013, Andrew Coyne wrote a provocative opinion piece for the National Post on the issue of unpaid internships: "If unpaid internships are exploitation, why don’t the kids just stay home?" In his essay Mr. Coyne advances the thesis that unpaid internships "are the job equivalent of a small-cap growth stock — no dividends, but the promise of heady capital gains in future." Essentially, the argument advanced by Mr. Coyne is that the reason some people elect to take up an unpaid internship is for the opportunities that are opened by so doing and they should be free to do so without interference.

But, Mr. Coyne's position got me thinking: are these internships really an opportunity for career advancement or are they, as others, such as Toronto labour lawyer Andrew Langille, argue, exploitation? Incredibly, I found myself thinking about something actor Ashton Kutcher said at 2013 Teen Choice Awards.

In accepting the "Ultimate Choice Award" Kutcher revealed that before working as an actor (and changing his name from Chris to Ashton, his middle name) he had worked in a number of different positions ranging from, at age 13, helping his father carry shingles up to roofs, to washing dishes in a restaurant, followed by working in a grocery store deli, etc., etc., all of which, Kutcher stated, was just a stepping stone to his next job. This life experience led Kutcher to conclude that "opportunities look a lot like hard work.” If you can get past the adolescent screaming, Kutcher's speech is actually worth a listen.

If what is being done for the ‘employer’ looks like work, then it should be compensated as work

In a somewhat widely circulated quotation I gave the Toronto Star back in July of 2013, I took the position that, "if what is being done for the ‘employer’ looks like work, then it should be compensated as work.”

This position, coupled with Kutcher's opinion that "opportunities look a lot like work" led me to wonder whether sometimes opportunities for advancing one's self and one's career are really just work. And, if those "opportunities" are "work," should they not be compensated as work, as I argued in July?

Of course they should, I conclude. Actually, I am not entirely sure that Mr. Coyne and I disagree on this fundamental point. In his article Mr. Coyne goes on to argue that:

With an internship, you don’t know until you get into the job — and often not until long after — whether the experience gained is worth it. So critics are right, at the least, to be concerned that companies not misrepresent the nature of the work.

With that point I agree, and it is essentially what I was arguing with respect to the Bell Professional Management Program back in July of 2013.

Sometimes opportunities will be actual opportunities. The consideration for working that opportunity may only be career or self-advancement. However, the concern I, and hopefully others, have is that sometimes what is actually being offered is the "opportunity" to work for no money.

What is the Answer?

Funny enough, the answer I believe is already on the books. The Ontario Employment Standards Act, 2000 defines when someone is "working," for which they are to be paid wages. For a summary of that law, see my earlier post Unpaid Internships.

The reality is that there is no easy answer. The law is not as clear as some would wish it to be. Similarly, the law is only beneficial when people ask that it be enforced; a risky proposition some would submit. What would benefit both employers and employees would be random spot audits of workplaces by the Ministry of Labour, as is done for workplace health and safety issues. In those random audits "interns" would be asked about the nature of work being performed and what value that "opportunity" is providing to them. If the opportunity is for the benefit of the intern and meets the criteria established by the ESA, more power to both intern and 'employer.' If, however, the intern is "working," then the result should not only be that the "intern" be paid wages, but the employer should be sanctioned.

The point is that the onus should not always be on the intern, as the same has been equated to career suicide. One need only read the comments after any newspaper article on the topic to see that the position is repeatedly advanced. Without some sort of shared responsibility the situation will not improve, for either side.

What employers should note is not only are the requirements for unpaid internships strict and difficult to meet, especially the criterion that the person providing the training derive little, if any, benefit from the activity of the individual while he or she is being trained, but simply because both sides agree that the "worker" / "student" / "intern" will not be paid is not determinative of the issue. If the intern elects to make a complaint to the Ministry of Labour, even after he or she has left 'employment,' the Ministry can still order you to pay wages that ought to have been paid. On this point see my earlier post Co-op Student Owed Wages Despite Agreement.

What should businesses and organizations considering taking on an unpaid intern do? Perhaps not surprisingly, I am going to suggest seeking professional legal advice. Not only can the Ontario Ministry of Labour order you to pay wages to what you thought was to be an unpaid intern, but the publicity that can surround such an order can be even more damaging. 'Getting it wrong' can be damaging and prudence would dictate ensuring that the approach taken is correct.

The professional, experienced and cost-effective employment lawyers for employers at Ottawa's Kelly Santini LLP would be happy to be of service to your business or organization with respect to this or any other employment law issue.

The takeaway for employees is even if you initially agreed with someone that you would not be paid for your co-op position, if what you end up doing looks more like work than it does like training, you may have the right to seek wages from the company that hired you.

While typically such cases can be handled by the Employment Standards Office of the Ontario Ministry of Labour (a.k.a. “the labour board”) without charge to you, for those looking for legal advice with respect to their situation, the employment lawyers for employees at Ottawa's Kelly Santini LLP would be happy to be of service to you as well.