Lying About Credentials on Résumé is Not Just Cause 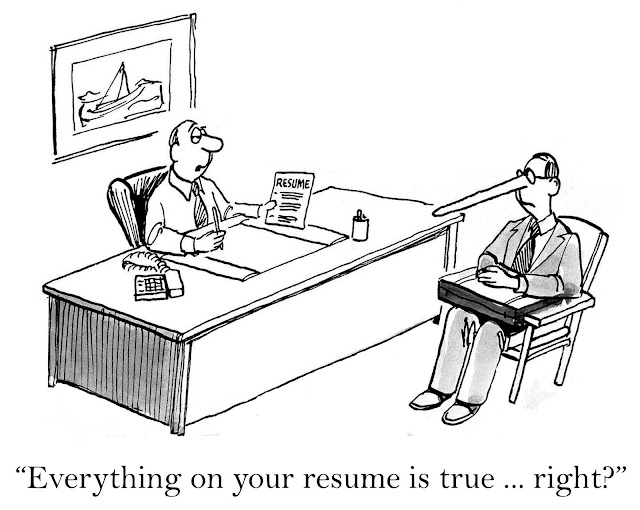 Is overstating one’s credentials as a salesperson and then failing to complete a single sale of the employer’s wares within 40 days of commencing employment “just cause” to terminate an employee’s employment? As infuriating as it may sound to some employers, according to a decision from the Provincial Court of British Columbia, Lura v. Jazz Forest Products (2004) Ltd., 2014 BCPC 247 (CanLII), the answer is “no, it is not just cause.”

The case concerned an action brought for wrongful dismissal damages. The plaintiff employee claimed that he had been wrongfully dismissed from employment and sought six months pay in lieu of reasonable notice. The defendant employer defended, taking the position that the employee had given it just cause for dismissal.

As set out in the court’s reasons for decision:

“During my 26 year career with MacMillan Bloedel/Weyerhauser, I have had the opportunity to sell and market forest products throughout the world, including North America. I had in-depth knowledge of the product, have extensive experience in sales and marketing and customer service and satisfaction. I have good computer skills and an aptitude for numbers. I am hard-working, have a very strong work ethic and can handle lots of pressure situations. “When the lumber industry was at its lowest I started my own company, Wood Source Forest Products Inc. and was very successful for a number of years. I wound the business down recently after the person financially backing me passed away.”

[6] The resume attached to the email is undated. It states that the Claimant was the Sales Account Manager, North American Sales, for the Weyerhauser Company Limited (formerly MacMillan Bloedel Ltd.) from 1995 to 2002 and that the Claimant was employed with that company from 1974 to 2002. The resume lists the Claimant’s most recent employment as being with Wood Source Forest Products Inc. from February 2002 to “present”.

[8] In the two years prior to being hired by the Defendant, the Claimant worked outside of the lumber industry. He worked as a heavy haul truck operator in Fort McMurray, Alberta, at a nursery in Abbotsford, and as a security guard in Chilliwack. When he applied for the position with the Defendant, he was working for Paladin Security as a security guard and had been working in that position since September of 2013.

After Jazz Forest Products hired Mr. Lura, however, it became clear that he may not have been wholly truthful on his resume. Moreover, difficulties soon emerged. According to the decision, Mr. Jasvir Binning, President of the Defendant, testified that he believed that the plaintiff “was trying” but that the defendant could not carry a salesperson at a cost of $3500 a month when the salesperson was not selling anything.

As further set out in the court’s reasons:

There was also a discussion about the possibility that the plaintiff had forwarded emails to his personal account and then deleted them from the company’s mail system, in express violation of the terms of his written employment agreement. While a further arrow in the employer’s quiver, the fact is not the subject of this analysis.

In resolving that the employer did not have just cause to summarily terminate the plaintiff’s employment, Judge K. D. Skilnick held as follows:

[31] The relationship of employer and employee is a contractual one. At common law, in the absence of a specific provision otherwise, an employer may not dismiss an employee without giving the employee reasonable advance notice of the termination of employment or compensation in lieu of notice. An exception to this general rule is where the dismissal is for just cause.

[37] The dishonesty of an employee has sometimes been found to be sufficient grounds for dismissal, provided that the dishonesty is significant and is established on a balance of probabilities…

[42] Yet as much as these acts give rise to concerns about the Claimant’s honesty, it is not clear that they are sufficient to warrant the remedy of dismissal. The misrepresentation about the Claimant’s experience in the lumber industry would be more troubling if he had never worked in the industry or if he had not done so for over a quarter of a century. The loss of the email has not been shown to have somehow adversely affected the Defendant’s business. The fact is that the Claimant was not making any sales and it is unlikely that the presence of the email would shed any worse light on that fact. The reasons for the Claimant’s poor performance as a salesman are unclear. It has not been shown that he was not showing up for work, was not trying to make sales or was guilty of some other misconduct. The missing emails may show some other misconduct, but this is speculative…

[43] While the Claimant’s conduct in this regard does not present him in a favourable light, I am unable to conclude that his dishonesty goes to the core of the employment relationship to a degree that warrants his dismissal for cause. While the facts of this case may be described as “close to the line”, I am not satisfied that they Defendant has shown just cause for dismissal of the Claimant.

In the result, the plaintiff was awarded two months’ pay in lieu of reasonable notice.

I have no doubt that this decision frustrated the defendant employer. The employee had essentially lied about his credentials and then was unable to produce a single cent of value for the employer in his nearly six weeks of employment.

As Judge Skilnick correctly, in my view, observed, in order for an employer to summarily dismiss an employee without providing the employee with some form of notice or payment in lieu, the employee must be “guilty of serious misconduct, habitual neglect of duty, incompetence, or conduct incompatible with his duties, or prejudicial to the employer’s business, or if he has been guilty of willful disobedience to the employer’s orders in a matter of substance, the law recognizes the employer’s right summarily to dismiss the delinquent employee.” (See R. v. Arthurs, Ex parte Port Arthur Shipbuilding Co. (1967), 62 DLR (2d) 342 (ON CA), (reversed on another point (1968), 70 DLR (2d) 693 (SCC)) at p. 348).

So, while it is clear that the employer had every reason to end Mr. Lura’s employment, what the employer did not have was “just cause,” which, again, is a legal construct.

If you are a worker in Ontario and have recently been let go from your job, you need to speak with a lawyer before making any final decisions with respect to your case and certainly before you sign any full and final release in favour of your employer. The professional, experienced and cost-effective employment lawyers for employees at Ottawa's Kelly Santini LLP would be happy to be of service to you.

If you are an employer in Ontario and are thinking about ending the working relationship with one of your employees, it will likely pay to speak with an experienced employment lawyer first.

The professional, experienced and cost-effective employment lawyers for employers at Ottawa's Kelly Santini LLP would be happy to be of service to your business or organization.