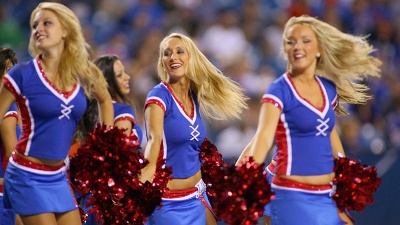 "You could not pay me to cheer for the Buffalo Bills." The same is a reasonable position taken by a number of football falls. But what about the Buffalo Bills cheerleaders, the “Buffalo Jills” (seriously, that’s what they are called), should they be paid for cheering at Buffalo Bills home games?

In a continuing class action lawsuit brought by a number of former “Jills” against the team, (and others including the NFL), the plaintiffs allege that they were subject to incredibly stringent, if not downright ridiculous conditions of employment, such that the team’s position that the Jills were “independent contractors” was wrong. The Jills claim wage theft.

In an opinion released January 5, 2016, and available online at Ferrari v Mateczun et al., Index No. 804125-2014, the Honorable Timothy J. Drury, Erie County, New York, Supreme Court Judge held that the case could proceed as a class action. Express in the same is that the judge had found that the Jills were, in fact, employees and not independent contractors.

At last it would appear that the Buffalo Jills have something to cheer about.

The crux of the claim, as I understand it, is that the Jills were required to provide cheerleading services to the Buffalo Bills home games without cash compensation.

According to the Answer filed by the Bills, the Jills were the sole responsibility of Citadel Broadcasting Company, which had entered into a contract with the Bills, granting Citadel the exclusive right to cheerleading during Buffalo Bills home games for the 2007, 2008, 2009, and 2010 seasons.

According to Judge Drury, the Code of Conduct then detailed stringent conditions for her work as a Jill which called into question her status as an independent contractor.

To put the issue into focus, in summarizing the case to be decided Judge Drury wrote the following:

Therefore, the Plaintiffs have submitted evidence from April 9 and April 27, 2008 to the present that the members of the Jills cheerleader squad were required to work for the defendants not as employees but as independent contractors and not paid by the Bills or the other defendants, when in fact they were employees of the defendants. Given the above, the defendants would be in violation of the various causes of action the plaintiffs have alleged dealing with their wage claims. The Bills would be responsible for requiring the other employer defendants to misclassify the Jills and the NFL would be responsible for affirmatively approving the unlawful practice.

In rejecting the argument that the Jills were an amalgam of independent contractors, Judge Drury wrote this:

… they cannot sustain that claim in the face of the Code of Conduct that bound them and treated them as employees. By definition the defendants could not produce a viable cheerleading squad with independent contractors.

Yes, you read that correctly. Those pearls of wisdom came from the 2013-14 handbook. “Oh my goodness” indeed.

The decision itself actually turns on whether to certify the proceeding as a class action. Judge Drury, applying New York Class Proceedings legislation found sufficient commonality of issues to certify the case as a class proceeding. Given the nature of this blog I will not get into his reasons, which are sure to be appealed in any event.

When I first posted the New York Post story to Facebook it generated a lot of reaction. Most of that reaction focused on the Code of Conduct, and rightly so; most of what is reported to be included is simply ridiculous if not downright offensive.

However, as I noted on Facebook, to be clear, from an employment perspective what mattered was the degree to which the employer attempted to control how the worker performed the tasks asked of her. The point in issue was not whether the rules were ridiculous, but rather whether the "Buffalo Jills" were employees or independent contractors. The judge found that by strictly controlling how the girls performed the tasks asked of them, the team had created an employer/employee relationship.

In making those statements I was referencing what I have often said about the employer/employee relationship: It is immaterial what you call the relationship, substance prevails over form. For a more thorough analysis of this issue see my post Independent Contractors and Employees on Contract – Understanding the Semantics of Ontario Employment Law.

I do not profess to know the first thing about New York state employment law. However, if it is anything like Ontario employment law, then the chance that these women were truly employees, and not independent contractors, looks pretty good.

Every time the issue of employee versus independent contractor comes up I write the same thing, “If you are a worker in Ontario and are unsure of your rights and responsibilities in employment, it may make sense to speak with a lawyer. If your employment has been terminated and your employer is advising you that you are not entitled to severance because you were an “independent contractor” or “on contract,” then it almost certainly makes sense to speak with a lawyer before making any final decisions about your case.” That wisdom holds.

What this case shows employers is two things: (1) Just because you call a worker an independent contractor does not mean the court will agree; and (2) Employers need to be aware that subcontracting the work to a third party may not wholly absolve them from liability if the subcontractor ‘gets it wrong.’