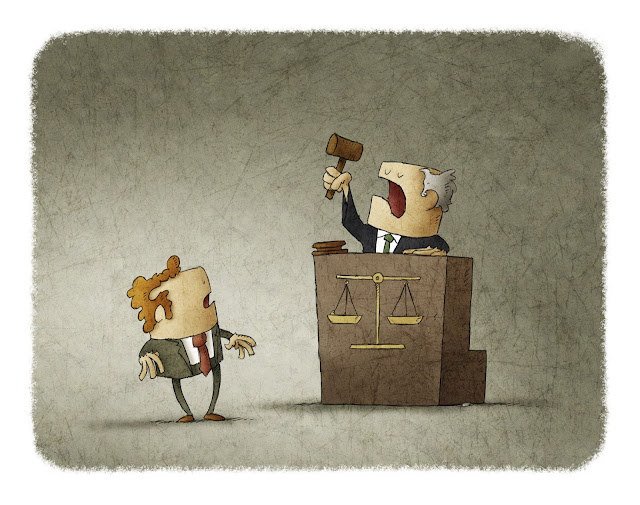 There is no shortage of things that can leave one feeling as if he has been “wronged.” However, when it comes to a lawsuit, even one commenced in the Small Claims Court, unless that wrong is a legal wrong the court will not award the claimant any money.

In the area of employment law, there is similarly no shortage of things that can happen at work that can leave one feeling as if he has been wronged. This blog has frequently considered the issue of workplace harassment and the effects of the same. (See e.g. Claims of a Hostile Work Environment: Shields not Swords?)

Although it was not an employment law case, and is therefore a bit of a departure from this blog’s regular content, the decision of the Brampton Small Claims Court in Baker v Royal Bank of Canada, 2016 CanLII 30097 (ON SCSM) very aptly demonstrates the point made above: no legal wrong, no damages.

On December 16, 2014, on his way home, the Plaintiff stopped in at the Royal Bank of Canada RBC branch, at 235 Queen Street East, Brampton. As it was after hours, he deposited his cheque payable to him, in the amount of $33,000 in the ATM machine. Upon arrival at home, he phoned RBC’s 800 line to inquire as to whether he could withdraw funds from the account. The Plaintiff testified that he was advised that he “should be able to, based on the discretion of the manager of the branch.”

The following day (December 17th), the Plaintiff attended in person at the branch to withdraw funds. He was told by a customer service representative that there was a hold on the cheque. The Plaintiff testified that the bank representative was very rude, causing him to leave in a huff. The judge noted that the bank statements, filed, showed that the Plaintiff was, in fact, able to withdraw $3,000. When he returned home, he again reached out to the RBC 800 line and was once again given similar direction as the evening before.

The next day, the Plaintiff returned to the same branch and was served by a different customer service representative. The Plaintiff testified that he maintained his composure as he explained the circumstances. This time, the manager came out to the counter and asked the Plaintiff to accompany him into his office. The Plaintiff testified that this manager was extremely unpleasant as he interrogated him and finally told him that there is an eight day hold on the funds. The Plaintiff tried (he claimed) to explain that it was fairly urgent that he be able to withdraw funds, at which point, the manager “violently tossed” his debit card on the desk and told him to leave.

The Plaintiff testified that he was shocked and humiliated from the treatment he received, even to the point of breaking down in tears, as he drove to another bank branch in Toronto. When he arrived at the Toronto branch, he was greeted by an empathetic customer service representative who knew the Plaintiff. After a phone call and the customer service representative conferring with the manager, the Plaintiff was told he was free to withdraw all or any of his funds.

On January 19, 2015, the Plaintiff attended again at the RBC branch at 235 Queen Street East, Brampton and once again made use of the ATM machine, making two deposits totaling $705. The next day, he went to another RBC branch at the Bramalea City Centre. He was told that there would be a hold on his funds until January 21, 2015.

On January 21, 2015, the Plaintiff attended at the RBC branch at 235 Queen Street East, Brampton and tried to withdraw $100 cash from the ATM machine. It was declined. He then went to the bank teller and once again, the manager came out and an altercation ensued.

At that point, the Plaintiff left, following which, he unsuccessfully tried to report the incident to the Police.

As a result of all of the above, the Plaintiff made a claim to the Small Claims Court seeking damages in the amount of $25,000, (as stated in his Claim), “We need to send Don (the bank manager) a strong message violating a persons rights is no joking matter – keep your racist thoughts to yourself.”

In dismissing the plaintiff’s claim the Honourable Deputy Judge Martin E. Klein made the following observations and comments:

[9] The only two witnesses at this trial were the Plaintiff and the manager; the two parties that were in the “confrontation.” No one else was called to give evidence. Therefore, this court is left with very contradictory evidence; not corroborated or bolster by any one, third party. As such, it is quite impossible for the court to discern or ascertain the truth of what truly took place.

[10] Given the dichotomy in the evidence, I turn to the “RBC Royal Bank Disclosures and Agreements related to Personal Deposit Accounts,” filed, which explains the bank’s policy:

■ Four (4) Business Days after the day of deposit for cheques and other negotiable items in Canadian dollars deposited to a personal deposit account in person with an employee at one of our branches or points of service and drawn on a Canadian branch of a Canadian financial institution;

■ Five (5) Business Days after the day of deposit for cheques and other negotiable items in Canadian dollars deposited in any other manner (such as at an ATM) drawn on a Canadian branch of a Canadian financial institution; (emphasis added)

■ Five (5) Business Days for cheques and other negotiable items in United States dollars drawn on a Canadian branch of a Canadian financial institution;

■ Fifteen (15) Business Days for cheques and other negotiable items drawn on U.S. banks, deposited at a Canadian branch of the Bank or at one of the Bank’s ATMs;

■ Twenty-five (25) Business Days for cheques and other negotiable items drawn on foreign banks other than U.S. banks.

If the item deposited is returned for any reason after the hold period expires, we will charge the amount of the item to your Account. We also have the option to send any negotiable item on collection rather than hold the proceeds as set out above.

[11] Although the Plaintiff feels that he was “singled out” or discriminated against, it is clear that the bank’s policy gives it the right to hold funds deposited into an ATM for a period of five business days, to ensure they clear.

[12] Additionally, I am acutely aware, from reading his Claim and from hearing his oral evidence given at trial, that the Plaintiff feels he was “wronged.” However, given that I have before me (in evidence) two totally different accounts of what took place, I cannot find, beyond a preponderance of evidence, that the Plaintiff’s recounting of what took place is more convincing from that of the bank manager.

One of my ‘go-to’ quotations about workplace harassment is that of Justice Perrell in the case of High Parklane Consulting Inc. v. Royal Group Technologies Limited, 2007 CanLII 410 (ON SC):

That quotation, which was provided in a decision dismissing a plaintiff’s claim for intentional infliction of mental distress, concisely summarizes the general position of Ontario law: Tort law does not provide compensation for all stress-causing and nasty conduct that individuals may suffer at the hands of another.

It is an important point to remember when considering taking up legal action, even in the Small Claims Court.

I appreciate that the case summarized above had nothing to do with employment law on the facts. However, the lesson that can be extracted from that case is equally applicable to employment law situations: look before you leap.

The takeaway for employers from cases like this one is that you do not have to give in simply because you get sued or because someone claims that you have wronged them. Yes, lawsuits are bothersome (to put it mildly) and they come with a real cost, not to mention to opportunity cost of defending them, one to not have to capitulate to every demand.