The Trumping of Hope. The Court of Appeal for Ontario’s Merciless Approach to Contract Interpretation in Employment Law 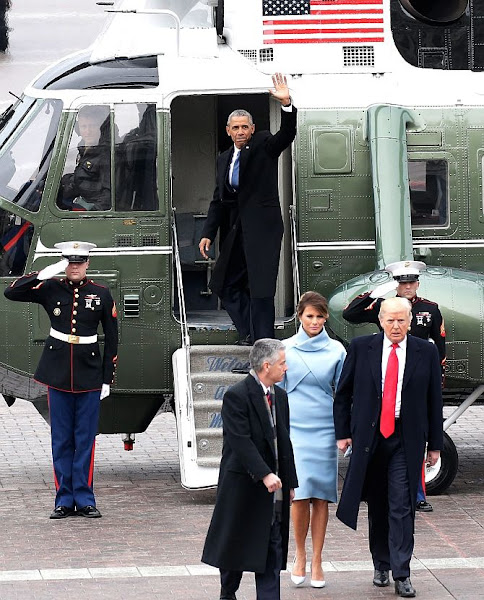 On September 16, 2021, I published a post titled “Hope for Ontario's Employer Bar: The ONSC's Decision in Rahman v. Cannon Design Architecture Inc.” The artwork I selected for that post was the iconic “HOPE” poster used in 2008 by the Obama campaign when the then-US Senator was running for President.

“Hope” was an appropriate word to describe the employer bar’s reaction to the Superior Court’s decision in Rahman. In that case, Justice Sean F. Dunphy of the Ontario Superior Court of Justice had held that an employee’s sophistication and the fact that she had retained independent legal advice were factors in the determination of whether a contractual termination provision ought to be enforced as written.

Justice Dunphy further held, following the approach more commonly employed in British Columbia (see my commentary in my post Employment Law Isn't Real) that, “Every contract – including this one – must be interpreted with a view to giving expression to the mutual intention of the parties as expressed in the words used by them.”

The employee in the Rahman case appealed Justice Dunphy’s decision to the Court of Appeal for Ontario.

And, just as “Hope” left Washington on January 20, 2017, hope for the employer’s bar was “trumped” when the Court of Appeal released its decision in Rahman v. Cannon Design Architecture Inc., 2022 ONCA 451 (CanLII).

I set out the material facts of the case in my earlier post, linked above. The Court of Appeal’s decision in Rahman is truly more of a decision concerning legal approaches than the application of those approaches to the facts.

On that point, and as a quick refresher, Justice Dunphy’s reasons for initially finding for the defendant employer were as follow:

[26] There is no basis to apply a strict or even adverse construction approach to the termination provisions of this employment contract in the context of this case where:

a. the termination provisions were the object of specific negotiation with the benefit of time and independent legal advice between reasonably sophisticated parties with neither compulsion nor marked disparity in bargaining power;

b. the negotiations resulted in material improvements for the benefit of the prospective employee in excess of ESA minima; and

c. the offer letter contains an explicit “for greater certainty clause” recognizing that the employer’s “maximum liability … for common law notice, termination pay, benefits continuation, severance pay, or payment in lieu of notice” shall be limited to the greater of the notice required in the Officer’s Agreement or the minimum amounts specified in the ESA.

[a]bsent considerations of unconscionability, an employer can readily make contracts with his or her employees which referentially incorporate the minimum notice periods set out in the Act or otherwise take into account later changes to the Act or to the employees' notice entitlement under the Act. Such contractual notice provisions would be sufficient to displace the presumption that the contract is terminable without cause only on reasonable notice.

[28] The twice-repeated language of this contract quite explicitly follows the standard suggested by Machtinger and referentially incorporates the ESA minimum standards. It is not necessary to enumerate them exhaustively in the contract, particularly when they are subject to periodic change. Every contract – including this one – must be interpreted with a view to giving expression to the mutual intention of the parties as expressed in the words used by them. That intent is inferred from an examination of the surrounding circumstances. Conclusions reached in another case – particularly one such as Ojo post-dating this contract – are of limited assistance in construing the intention of these parties to this agreement in this context.

[29] There is no basis in this case to imply into the general phrase “just cause for summary dismissal” a standard below the ESA standard of wilful misconduct absent any evidence that such represents a reasonable construction of the intention of the parties in the context of the employment agreement in question. There is no evidence of any policy or practice of Cannon Design authorizing summary dismissal of employees for cause in circumstances beyond the limited circumstances enumerated in the ESA and its regulations. The Oosterbosch v. FAG Aerospace Inc., 2011 ONSC 1538 (CanLII) case relied upon in Ojo made no generalized findings regarding “just cause for summary dismissal”. Oosterbosch considered a specific set of written employment policies that clearly did authorize dismissal in circumstances beyond the “wilful” standard required by the ESA.

[30] There is no basis for me to infer in this contract an intention to characterize non-wilful misconduct as amounting to “just cause for summary dismissal” and I cannot in fairness do so. If none of the parties to the contract at its inception – having turned their minds to the very subject of ESA minimum standards applicable on termination and their priority – took objection to the general “just cause for summary dismissal” language used it would be entirely illogical to infer nevertheless an intent to contract out of well-known and long-standing minimum standards in the jurisdiction in which they were operating. The language employed in no way requires such an illogical interpretation and there is no evidence of an existing non-conforming policy.

[37] Uncertainty in the application of the law to fairly negotiated employment agreements will only have the unintended consequence of causing employers to forego efforts to offer severance benefits beyond the ESA minima for fear that any steps beyond the limited bounds of the ESA will carry an unacceptable level of risk of being found invalid with the resulting potential for common law liability far in excess of what either side expected at the time the contract was agreed to. Doubtless this is already occurring to some degree. Over time, there are no winners in such a world.

At paragraph 37 of his reasons for decision, Justice Dunphy lamented that a strict application of the law could result in a situation whether “there are no winners.” In litigation, it is the court who resolves who “wins” and who “loses.” In this case, the Court of Appeal for Ontario (Gillese, Trotter and Harvison Young JJ.A.) held that it is the employee who should “win.”

Writing on behalf of the Court, Justice Eileen E. Gillese provided the following reasons for its decision:

[6] … The plain wording of the contractual termination provisions runs afoul of the ESA. Accordingly, the provisions are void and cannot govern the termination of Ms. Rahman’s employment.

[24] In my view, the motion judge erred in law when he allowed considerations of Ms. Rahman’s sophistication and access to independent legal advice, coupled with the parties’ subjective intention to not contravene the ESA, to override the plain language in the termination provisions in the Employment Contracts. By allowing subjective considerations to distort and override the wording of those provisions, the motion judge committed an extricable error of law reviewable on a correctness standard... It is the wording of a termination provision which determines whether it contravenes the ESA – even compliance with ESA obligations on termination does not have the effect of saving a termination provision that violates the ESA.

[31] Accordingly, the termination provisions in the Employment Contracts are void and cannot be relied upon by the Respondents.

I am being a little cheek by suggesting that all hope for the employer bar was trumped by the Court of Appeal’s decision in Rahman. But for my invocation of President Obama’s campaign poster when I published my initial post, most of this hue and cry wouldn’t make much sense at all.

The fact is, the Court of Appeal is correct. At least in Ontario. At least for now.

In Ontario, the law is “if the plain wording of the contractual termination provisions runs afoul of the ESA, then it is void.” Nothing an employer, or the employee, does can save poor language. For the reasons canvassed in Employment Law Isn't Real Ontario’s approach has begun to diverge from that of other jurisdictions, including those of British Columbia and Alberta.

The question is whether the intention of the parties to the contract matters when deciding whether to enforce the contract or deem it void ab initio for illegality.

In Ontario, the answer appears clear: The parties’ intention does not matter; “if the plain wording of the contractual termination provisions runs afoul of the ESA, then it is void.”

While the policy goal of using interpretation of employment contracts to protect vulnerable employees is an important one, it only goes so far. In a situation where the pursuit of policy goals would interfere with the integrity of what the parties agreed to, it must give way to the principle of interpretive accuracy...

There are a number of examples of employment law policy concerns having to give way to the parties’ intentions as expressed in an employment contract. The notion that an employment contract provides for termination without cause only on reasonable notice is only a presumption, which can be rebutted if a contract is sufficiently clear. This means that the crucial question is whether termination provisions are sufficiently clear, not whether they are unfair, onerous or the result of undue influence or a power imbalance...

While Professor Hall’s approach has found favour among some appellate courts, see e.g. the Alberta Court of Appeal’s reasons for decision in Rice v Shell Global Solutions Canada Inc, 2021 ABCA 408 (CanLII) at paragraph 21; or the British Columbia Court of Appeal’s reasons for decision in Miller v. Convergys CMG Canada Limited Partnership, 2014 BCCA 311 (CanLII), I do not believe the same can currently be said of Ontario’s top court when it comes to the interpretation of employment contracts.

What the Court of Appeal’s decision in Rahman signals for employers is that Ontario’s courts are to be merciless in their review of your employment contracts. The slightest of drafting errors, even if immaterial or unrelated to the employer’s reason for decision (Waksdale) and even if contained in a section of the contract other than that dealing with termination (see e.g. Henderson v. Slavkin et al., 2022 ONSC 2964), and even if contrary to the parties’ shared intention, will result in the termination clause been struck down as illegal.

Accordingly, if you are an employer and you require an employment agreement that will, at the end of the day, withstand judicial scrutiny, then it pays to invest in a professionally prepared employment contract by a lawyer who practices Ontario employment law.

The takeaway for employees is obvious: Don’t accept that which your employer offers you by way of severance without first speaking with an experienced employment lawyer. Even if you agreed to a set amount, and intended to do so, if the contract you signed has even the slightest of technical irregularities, you may be entitled to a greater amount of severance than that to which you initially agreed. While the contract may be binding, it will likely be worth the investment to have it reviewed by an experienced employment lawyer before signing a full and final release.

Need an employment contact prepared? Been let go and want to know if your employer’s offer is fair? Call me. Email me. Do what works for you.

Sean P. Bawden is an Ottawa, Ontario employment lawyer and wrongful dismissal lawyer practicing with Kelly Santini LLP. He is also been a part-time professor at Algonquin College teaching Employment Law. He has previously taught Trial Advocacy for Paralegals and Small Claims Court Practice. For 2.5 years he was in-house legal counsel providing employment law advice to one of Canada’s largest corporations.