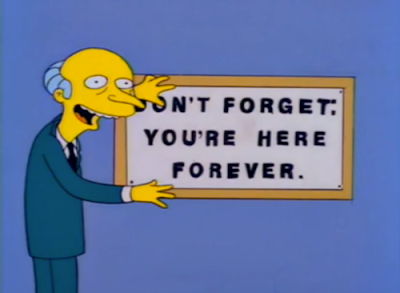 "Don’t forget: you’re here forever." Those five words (seven if you are particular) are said to occupy the plaque above Homer Simpson’s workstation. As regular, and one has to admit older, fans of the iconic television show will remember, in the episode “And Maggie Makes Three”, which originally aired on January 22, 1995, Homer’s boss, Mr. Burns, affixed said plaque above Homer’s workstation after our hero was forced to crawl back to the Springfield Nuclear Power Plant in search of his old, and much despised, job. And while Homer makes the best of the situation, covering certain parts of the plaque with photos of his infant daughter Maggie such that the plaque reads “Do it for her”, the plot point raises an interesting question about employment law in Ontario: Is there such a thing as a job “forever”? 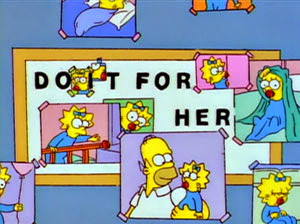 One of the most common misconceptions about employment law in Ontario is that so long as an employee continues to satisfactorily perform his or her job, that employee cannot be fired. As this blog has frequently stated, that simply is not the case and employers generally have the right to terminate an employee’s employment for any reason at all, including no reason. (There are, of course, exceptions, such as the fact that an employer cannot dismiss an employee for a reason prohibited by statute; but those exceptions are few.)

A 2003 case from the Court of Appeal for Ontario, authored by the Honourable Justice Rosalie Abella, who now sits on the Supreme Court of Canada, Foreman v. 818329 Ontario Limited, 2003 CanLII 57401 (ON CA) held that the contract term “[The employer] shall not dismiss [the employee]” did not, in fact, entitle the employee to a job for life.

The plaintiff, Ms. Anne Marie Foreman was hired by one Mr. John Kirby in February 1989 to manage the bingo hall in Stratford, Ontario. At the time, she and Mr. Kirby were romantically involved. Ms. Foreman reported directly to Mr. Kirby and enjoyed a relatively informal employment relationship with him.

Ms. Foreman was a successful bingo hall manager and by April 1990, she was working full-time as a manager and selling lottery tickets, dividing her time between the St. Thomas and Stratford bingo halls. She did not have a written employment contract.

In the spring of 1990, Ms. Foreman learned that Mr. Kirby had agreed to sell his shares in Suhan and 818329 to one Mr. Frank DiMaria. Mr. DiMaria owned Cadith Entertainments Ltd. ("Cadith"), which operated bingo halls in Ridgetown and Cobourg, Ontario.

Ms. Foreman anticipated that the share sale would result in a change of management and that she would have to report to Mr. DiMaria rather than to Mr. Kirby. Because she had heard that Mr. DiMaria had a reputation for replacing existing employees with friends and family, Ms. Foreman asked Mr. Kirby to arrange for a written employment contract which would secure her position as manager.

Mr. DiMaria agreed to provide Ms. Foreman with an employment contract. As a result, Mr. Kirby prepared a contract on Ms. Foreman's behalf, which included the following contractual provision:

The lawyer for Cadith returned the contract to Mr. Kirby with a proposed amendment inserting the words "except for cause" at the end of paragraph 5. This suggestion was, however, rejected by Mr. Kirby and the contract was signed on June 25, 1990 with the original language of paragraph 5 intact.

Nine months later, in March 1991, after being manager of the two bingo halls and selling lottery tickets for 26 months, Ms. Foreman was fired by Mr. DiMaria.

Mr. Foreman sued Suhan and 818329, as well as against DiMaria and Cadith, who had signed the employment contract as guarantors.

At trial, the judge found that Ms. Foreman had been dismissed without cause and was therefore entitled to damages. The trial judge further found that the 1990 contract was a contract for life and awarded Ms. Foreman $712,000 in damages. Not bad for a 32 year-old manager of two bingo halls who earned $640.00 per week.

In overturning the decision of the trial judge, Justice Abella wrote the following:

[17] There is no doubt that fixed term employment contracts are legal. In Ontario, such contracts are valid, but, as mentioned above, s. 2 of the Employers and Employees Act, RSO 1990, c E.12, limits the enforceable term to nine years. This limitation period can be waived in the case of any manager, officer or superintendent (s. 11(2)).

[18] This court recently considered the issue of fixed-term contracts in Ceccol v. Ontario Gymnastic Federation, 2001 CanLII 8589 (ON CA), where MacPherson J.A. observed at p. 624 that while fixed term contracts are legal and will be enforced if their terms are clear, "the courts require unequivocal and explicit language to establish such a [fixed term] contract…" (citing Professor Geoffrey England, Individual Employment Law (Toronto: Irwin Law, 2000) at p. 222).

[19] It is also possible to have a fixed term contract for the life of an employee. Lifetime employment, while legal, and in some cases even desirable, nonetheless requires even clearer articulation, given the profound financial responsibility of such a guarantee…

[20] In this appeal, however, there is no explicit language unequivocally stating that the fixed term is for life or until retirement age. The evidence discloses that what the parties intended was to protect Ms. Foreman from dismissal through the change in management and not for the rest of her life. Ms. Foreman, on whose behalf the contract was drafted, testified that the intention was protection from arbitrary removal in favour of Mr. DiMaria's family and friends, not employment for the rest of her life. The failure to include the words "except for cause" does not detract from this conclusion. As Ms. Foreman stated at trial:

I was concerned about my job being secure with [DiMaria's group] if they were the purchasers of his interest. They have a history and a reputation of firing and letting go employees for no apparent reason. Generally it would be to replace them with family and friends. …[I]t's the big guys move in and they come in and they just take over the hall and you go out the door. They escort you and you're gone.

[21] The contract was drawn up on behalf of Ms. Foreman by Mr. Kirby, who left the term of the contract ambiguous. In the absence of the requisite clarity for finding that this is a contract for a fixed life term, I would interpret the ambiguity against Ms. Foreman's assertions but in accordance with her evidence, and conclude that the employment contract provision insulates Ms. Foreman from dismissal indefinitely, but not for the rest of her life.

In the result, Justice Abella, applying the principles of "reasonable notice" reduced Ms. Foreman’s award from $712,000 in damages to $30,800, the value of one year’s salary.

As mentioned at the outset of this post, the purpose of this post is to disabuse most workers in Ontario of the notion that they have some sort of security of tenure. The reality is, absent some form of written agreement, such as a collective agreement, which says that an employer may only terminate an employee “for cause”, most employees can be terminated at any time for any reason, subject only to the obligation for the employer to provide the employee with "reasonable notice" or a payment in lieu thereof.

The takeaway for employees, obviously, is that absent incredibly clear and unambiguous contractual language that one’s term of employment is for the life of the employee, most contracts of employment are not, in fact, for life. Indeed I can think of very few jobs that one might even want for life, although being a parent certainly makes the list.

However, as the Foreman case demonstrates, just because one does not have absolute security of tenure does not mean that employers can simply terminate an employee’s employment with impunity. Ms. Foreman did still receive one year’s salary.

Calculating damages for wrongful dismissal is more of an art than a science. If you have been let go from your job and you are finding all of this a little confusing and perhaps disheartening, it is probably best to speak with an experienced employment lawyer.

There are two takeaways for employers from this case: First, while this blog frequently recommends the use of written employment agreements by employers, employers would be prudent to ensure that such contracts do not accidentally create an entitlement to a position “for life.” Second, employers do generally have the right to let employees go “without cause.” Few employees have positions for life; at least those outside the monarchy.