While the CBC was running a feature segment as to whether racism remains an element of Canadian society, a Burlington, Ontario seniors home care company was posting an online advertisement for a “Caucasian RN or RPN.” In an online advertisement posted to Craigslist, shown below, Retire at Home services advertised that a client was "looking for a Caucasian RN or RPN to work shifts that are between eight and 12 hours in length." 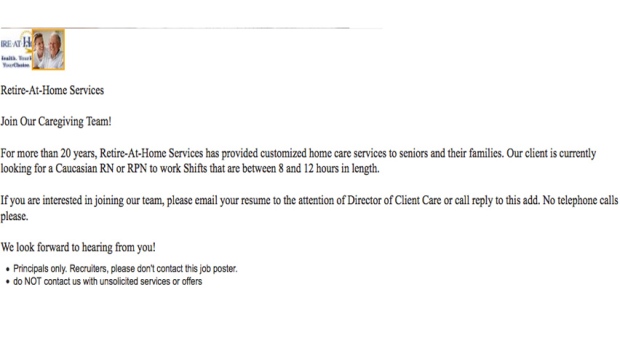 The advertisement and subsequent stories touch off a debate as to whether the company had done anything legally wrong and if so what consequences it may face as a result.

Section 5 of Ontario’s Human Rights Code generally prohibits discrimination in employment on the grounds of, amongst other things, race, ancestry, place of origin, colour, ethnic origin, citizenship, and creed.

Section 23 of that law extends the right to be free from discrimination in employment to the pre-employment recruitment of employees in two ways:

(1) The right under section 5 to equal treatment with respect to employment is infringed where an invitation to apply for employment or an advertisement in connection with employment is published or displayed that directly or indirectly classifies or indicates qualifications by a prohibited ground of discrimination.

(2) The right under section 5 to equal treatment with respect to employment is infringed where a form of application for employment is used or a written or oral inquiry is made of an applicant that directly or indirectly classifies or indicates qualifications by a prohibited ground of discrimination.

The law does make exceptions to the obligation to refrain from acting in a discriminatory way, one of which is in cases where “the primary duty of the employment is attending to the medical or personal needs of the person or of an ill child or an aged, infirm or ill spouse or other relative of the person.” (Human Rights Code, s 24(1)(c).) However, that exemption would only apply to an individual seeking personal care, not to a company such as Retire at Home.

Let us presume for the sake of argument that the company has broken the law, so what? The Human Rights Code in general and section 23 in particular is not policed in the same way that some other laws, such as the Criminal Code of Canada or the Highway Traffic Act are, i.e. law enforcement agencies investigate and then issue tickets or other financial penalties. In order for the company to be punished someone will have to commence an application to the Human Rights Tribunal alleging that he or she saw the advertisement and because of it felt that his or her rights in employment were violated.

There are very few reports cases concerning pre-employment discrimination. However, in the case of Bouraoui v. Ottawa Valley Cleaning and Restoration, 2014 HRTO 1303 (CanLII) the Human Rights Tribunal of Ontario awarded $8,000.00 in damages for injury to the applicant’s dignity, feelings and self-respect after he was advised during the pre-employment application process, “Try learning English you will have better luck I don’t hire foreners I keep the white man working.”

In finding that the applicant’s rights had been violated in that case, Vice-Chair Geneviève Debané commented as follows:

One hopes this is obvious, but the takeaway for employers with labour pains is that it is generally a prohibited practice in Ontario to seek to only hire whites, or men, or straight people, or Christians, etc. With a few exceptions, positions should be open to any qualified person; recall the uproar about the Quebec Charter of Values and one Toronto-area hospital's responding advertisement, below. 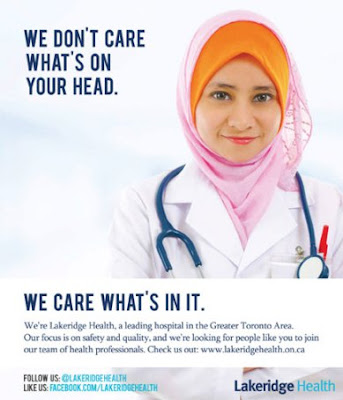 For employees the takeaway is this: generally speaking an employer cannot legally refuse to hire you just because you do not look like the person doing the hiring. Ontario’s laws prohibit such discrimination and if you are qualified to do the job, then such arbitrary factors such as what is on one’s head or one’s skin colour should not prevent employment.