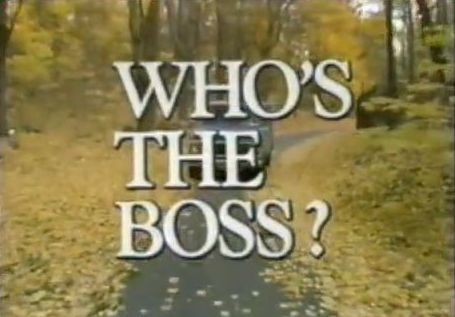 “Who's the Boss?” was an American sitcom created by Martin Cohan and Blake Hunter, which aired on ABC from September 20, 1984 to April 25, 1992. The series starred Tony Danza as a retired major league baseball player who relocates to Fairfield, Connecticut to work as a live-in housekeeper for a divorced advertising executive, Angela Bower, played by Judith Light. Also featured were Alyssa Milano, Danny Pintauro and Katherine Helmond.

The title of the show refers to the clear role reversal of the two lead actors, where a woman was the breadwinner and a man (although he was not her husband) stayed at home and took care of the house. The show is credited for challenging contemporary stereotypes of Italian-American young males as macho and boorish and wholly ignorant of life outside of urban working-class neighborhoods, as Tony was depicted as sensitive, intelligent and domestic with an interest in intellectual pursuits.

Things have changed in 30 years.

In employment law, sorting out “who’s the boss” can sometimes be no easier, as the case of Sproule v Tony Graham Lexus Toyota, 2016 ONSC 2220 (CanLII) makes plain.

Eight of the named defendants brought a motion for a summary judgment to have the claims dismissed by reason of there being no cause of action against them.

The defendants argued that the two individuals named as defendants, Maureen and Elizabeth Graham, were at all material times directors of Graham Automotive Sales Inc., and as such were not the plaintiff’s employer. It further submitted that six of the companies named in the statement of claim were simply holding companies and as such had nothing to do with the employment of the plaintiff.

The plaintiff argued that all of the corporate defendants were, in essence, one in the same: their assets are intermingled, they hold the same directing minds and the same shareholders, they share common employees and they are all operated as one inseparable business endeavor, known as “Tony Graham Automotive”.

Furthermore, the named individuals Maureen and Elizabeth Graham were the sole directing minds of all of the corporate defendants. They managed the day-to-day affairs of the Companies and have the final say on all major decisions involving these companies. Facts of which “Angela Bower” would no doubt be proud.

In providing his reasons for his decision to dismiss the plaintiff’s case against the eight defendants, the Honourable Mr. Justice Robert L. Maranger wrote the following:

[14] Maureen and Elizabeth Graham are the directing minds of the operating companies that form part of the Tony Graham automotive companies. In order to attract personal liability for their actions as corporate officers there would have to be certain specific available findings on the evidence. In ScotiaMcLeod Inc. v. Peoples Jewellers Ltd. (1995), 26 O.R. (3d) 481 (C.A.), at para. 25, the Ontario Court of Appeal indicated:

The decided cases in which employees and officers of companies have been found personally liable for actions ostensibly carried out under a corporate name are fact- specific. In the absence of findings of fraud, deceit, dishonesty or want of authority on the part of employees or officers, they are also rare. Those cases in which the corporate veil has been pierced usually involve transactions where the use of the corporate structure was a sham from the outset or was an afterthought to a deal which had gone sour. There is also a considerable body of case-law wherein injured parties to actions for breach of contract have attempted to extend liability to the principals of the company by pleading that the principals were privy to the tort of inducing breach of contract between the company and the plaintiff: see Ontario Store Fixtures Inc. v. Mmmuffins Inc. (1989), 70 O.R. (2d) 42 (H.C.J.), and the cases referred to therein. Additionally there have been attempts by injured parties to attach liability to the principals of failed businesses through insolvency litigation. In every case, however, the facts giving rise to personal liability were specifically pleaded. Absent allegations which fit within the categories described above, officers or employees of limited companies are protected from personal liability unless it can be shown that their actions are themselves tortious or exhibit a separate identity or interest from that of the company so as to make the act or conduct complained of their own.

[15] The two personal defendants in this case carried out all of their corporate responsibilities with the authority vested in them. The Plaintiff simply asserts that because they were the controlling minds on all relevant matters involving the running of the companies they are correctly named as party defendants. I disagree with this proposition. There is no allegation of fraud, deceit, dishonesty or a want of authority regarding the two personally named defendants. The pleadings do not allege facts, nor is there any evidence before the court, to support piercing the corporate veil in the circumstances of this case.

[16] There is no genuine issue for trial in relation to this issue, and for all of the above reasons the summary judgment motion to dismiss the claim against the personal defendants is granted.

[17] The plaintiff alleges that the 10 corporate defendants named in the statement of claim are common employers by virtue of the fact that the operating and holding companies are intermingled from the perspective of finances, human resources, accounting records, and that the accounting records list all of the companies as “Tony Graham Automotive Group”. He submits that the issue of the application of the doctrine of “common employers” is something that should be determined only after trial.

[21] I agree with the position advocated by the defendants. The fact that these companies are intermingled financially, even to a great extent, will not result in a finding that they had effective control over the employee. They are holding companies – nothing more, nothing less. They do not exercise directly or indirectly any control over the employees. The doctrine of common employer has no application to them on any analysis of the evidence. As such there is no genuine issue for trial.

As a result and for all of the above reasons, the summary judgment motion dismissing the claims against the six referenced holding companies and the two personally named defendants was granted.

This blog has previously considered the issue of common employers in the post Two Employers Under One Umbrella Both Get Soaked by Judge. That post looked at the case of Dear v Glamour Designs Ltd., 2015 ONSC 5094 (CanLII), in which the Honourable Justice S.A.Q. Akhtar held that there were simply too many interconnecting factors between two related companies to say that the two were anything but a common employer.

What the Dear case and this case have in common is that with respect to the operating companies there is the chance that the court will find the various companies to be a common employer, all exercising some form of control over the plaintiff. In that respect the earlier post may be of interest to those concerned about this subject.

As to the dismissal of the case against the holding companies, the same makes sense. If those companies exercised no control over the plaintiff, then it is difficult to say that they could qualify as his “employer.”

Sorting out for whom one works can sometimes be much more difficult than it should be. In making this statement I am not even getting into the issue of franchise relationship or subcontracting agreements, which bring their own challenges with them.

In any lawsuit the plaintiff wants to ensure that at the end of the day there will be someone with the means to satisfy the judgment. In that respect, it sometimes makes sense to point the finger in several, several directions, or to point multiple fingers.

However as the Sproule case demonstrates, pointing too many fingers without good reason can result in adverse consequences.

The takeaway for employers is that businesses are entitled to structure and operate their companies as they deem fit. A holdco/opco relationship is completely acceptable and the court will be reluctant to find all those separate corporations liable absent some degree of control.

That said, employers would be prudent to consider my review of the Dear case. Courts can, and do, find that closely related companies are common employers, thereby spreading liability around. Employers would be cautious as to how they operate, lest such a finding be made against them.