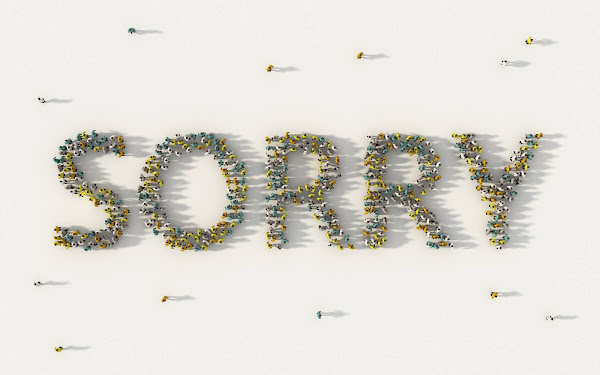 As mentioned, the thing for which Hucsko was supposed to apologize was making inappropriate comments.

The case concerned allegations of workplace harassment and much of the trial judge’s decision focuses on the investigation into the allegations made against Hucsko. Hucsko's comments were inappropriate as a review of the Court of Appeal's reasons demonstrates.

For the purposes of this post, what matter is what happened next. On July 10, 2017, representatives of the employer met with Hucsko for the purpose of reviewing the results of the investigation. Hucsko was given a memo in which the conclusions reached in the investigation were set out and corrective action required to be taken by him was specified.

The corrective action included providing an apology to the complainant. The memo stated: “You will be required to provide a direct apology to the female employee to whom you directed your inappropriate comments. Your supervisor and Human Resources Manager will also be present.”

Hucsko disputed the conclusions reached. He asserted that he had not done or said anything inappropriate to the complainant. He asked for time to seek advice.

Hucsko obtained legal advice. His lawyer sent a letter to the employer dated July 19, 2017. In that letter, counsel for Hucsko stated that he would participate in any training directed by the company that he take. However, the letter also stated that Hucsko was not prepared to make an apology admitting any wrongdoing on his part.

On July 25, 2017, the employer telephoned Hucsko. Representatives read a letter dated July 25, 2017, which was subsequently delivered to Hucsko. The letter stated that Hucsko’s employment was being terminated for cause effective immediately. The reason for the termination was “an irreparable breakdown in the employment relationship” based on the following:

As more thoroughly canvassed in my earlier post, Justice Taylor of the Ontario Superior Court of Justice held that Hucsko’s conduct did not justify a conclusion that there had been an irreparable breakdown in the employment relationship.

[38] The refusal to apologize is only part of the misconduct that the [employer] had to consider when deciding whether there has been a breakdown in the employment relationship. The refusal to apologize did not occur in a vacuum. The degree of seriousness of the misconduct that led to the discipline, and then to the dismissal, is critical to the ultimate assessment of the propriety and proportionality of the employer’s response. But the trial judge eschewed this analysis, finding instead that the nature and seriousness of the respondent’s comments were irrelevant and focusing solely on his refusal to apologize.

[55] In his testimony at trial, the respondent [Hucsko] confirmed that he understood that sexual harassment was a “fireable offence” and that that was a common understanding within the organization.

[56] However, the appellant [employer] did not initially terminate the respondent’s employment as a result of his sexually harassing conduct. It gave him the opportunity to redeem himself and to save his job by taking sensitivity training and apologizing to the complainant. In his testimony, the respondent described the course of corrective action directed by the employer as an “ultimatum”, and understood that the memo constituted a “final warning”. This was a fair and proportionate response by the employer.

[57] In response, the appellant consulted a lawyer, as he was entitled to do, and gave his response through counsel. He agreed to take the additional sensitivity training, but at the same time, he was “adamant” that it was unnecessary. This indicated a complete failure to acknowledge the nature and the seriousness of his conduct, and the effect it had on the complainant and on the atmosphere of the workplace.

[58] In addition, through his lawyer’s letter, the respondent refused to “issue an apology to [the complainant] admitting any wrongdoing”, on the basis that the facts were in dispute and the complaint was disconcerting to him. The letter expressly took the position that an apology was not appropriate, and did not seek any negotiation of the form or terms of an apology. In his testimony, the respondent acknowledged that “if you’re guilty of sexual harassment, or any kind of harassment, the complainant or the victim deserves an apology. That’s a no-brainer.” However, he stood firm in his position that “I was not going to apologize, because I did not harass that woman”.

[59] In those circumstances, the only conclusion the appellant could reach was that there was a complete breakdown in the employment relationship as (i) he was either unwilling or unable to understand the purpose and effect of the Workplace Harassment Policy and to take its requirements seriously and (ii) he was unwilling to accept the discipline imposed on him as a consequence of his misconduct of sexually harassing a co-worker. As a result, the appellant could have no confidence that the respondent would not continue with the same type of misconduct in the future.

[60] Faced with the respondent’s lack of contrition, lack of understanding of the seriousness of his conduct, and his refusal to comply with the reasonable and essential requirement of an apology to the complainant and target of his comments, the appellant’s decision to terminate the respondent’s employment was a proportional and wholly warranted response.

While the above is dispositive of the appeal, I want to include the following additional comments made by Justice Feldman:

[61] It follows that I reject the trial judge’s suggestion that in those circumstances, it was incumbent on the appellant to try to negotiate an acceptable form of apology with the respondent. I similarly reject the respondent’s submission in oral argument that the appellant was required to warn the respondent that if he did not apologize, his employment may be terminated. The respondent was treated fairly. He refused to comply with the discipline imposed and understood that this discipline presented an “ultimatum”. He could not have reasonably expected that he would be able to continue with his employment without apologizing to the complainant for his comments, that were found to be inappropriate.

[62] Contrary to the observation of the trial judge, this was not a situation where the employer was faced with two employees who could not get along and had to choose between them. One employee had engaged in workplace misconduct. It was that employee who had to either accept the appropriate disciplinary measures imposed by the employer to retain his position, or risk losing that position.

[63] I also reject the trial judge’s conclusions that the appellant’s decision to terminate the respondent’s employment was motivated by the fact that he sought legal advice, and that it was the appellant that created a situation that gave it just cause to terminate. These conclusions find no basis in the record.

[64] The appellant’s decision to terminate the respondent’s employment in these circumstances was justified and appropriate based on the three-part test from Dowling.

I included Justice Feldman’s comments, with which Justices Harvison Young and Thorburn agreed, to demonstrate the obvious: Her Honour was not having it.

This case is super helpful for those who work in the area of workplace harassment (which I have for over a decade now,) in demonstrating that the delivery of results and corrective action need not be the end of the workplace investigation. Employees found to have engaged in workplace harassment, especially sexual harassment, have an obligation to complete the corrective action prescribed by the employer and, if they fail to do that, then termination of employment for cause is a reasonably foreseeable next step.

The takeaway for employers is that if an employee, who is aware of the ramifications of engaging in workplace harassment, fails to show contrition and follow your reasonable directions for corrective action following a finding of wrong doing, then termination may be an appropriate next step.

Before doing anything however, you’re going to want to ensure that every part of your process has been buttoned up. That starts from the creation of the workplace harassment policy (it’s a statutory obligation to have one, by the way (OHSA, s. 32.0.1(1)(b)), to the investigation of complaints (also statutorily required (OHSA, s. 32.0.7(1)(a)), to the corrective action required.

The takeaway for employees who have suffered harassment is that sometimes the system works. Employers who take their responsibilities seriously will do the right thing, conduct a proper investigation and insist on appropriate corrective action. Most employees should be able to trust their employer’s process. Of course, where things don’t go as they should, that’s when it’s time to contact an experienced employment lawyer. HR is there to protect the interests of the company; not the individual worker. If the process is not yielding results, it’s time to get some advice on how to make the process work. We can help.

The takeaway for employees found to have engaged in workplace harassment, who are not terminated is to either see if the decision can be appealed or, if cannot, either abide by the punishment or be prepared to suffer the consequences. The employee in this case didn’t get fired because he refused to apologize, he got fired because he refused to acknowledge his wrongdoing and accept the consequences of same.